In 1950 the band again traveled to England, Ireland, Scotland and Holland, this time for a record-breaking five-month tour. It had been a long time coming, what with the war and all. During their sabbatical they had managed to raise a lot of money, which accounted for the length of the trip. Each boy only had to pay $100 and bring his own spending money. They played their way across Canada as their predecessors had done. On the trip Mr. D brought along no less that sixteen different concert programs. They were all stored in an old trunk that accompanied the band whereever it went! There was one program just for the trip across Canada and one program for the return trip across Canada. The other fourteen programs were for concerts in England, Ireland, Scotland and Holland.
Chris Stockwell (Stocky), returned as the band’s manager, and he had the boys booked solid into theatres, concerts, parks and VAUDEVILLE: The Winter Garden in Blackpool, Golders Green Hippodrome in London, the Palace Theatre, the Beach Pavilion, Wembley Speedway, the Parade Gardens, the Embassy, the Theatre Royal, the list seemed endless! Whether the boys were making up for lost time or just feeling their oats after the long war is hard to say, but they sure enjoyed themselves Excerpt from: By Jove What A Band 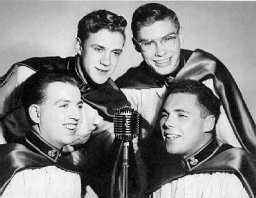 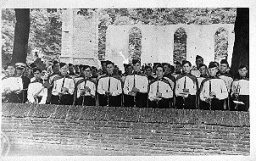 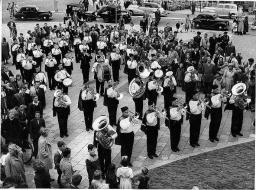 The Four Notes,  band visiting a Canadian cemetery in Holland, band arriving in the city of Amersfoort, Ron Colograsso and Colin Lea by huge billboard in Manchester advertising the Manchester Hippodrome, Ron Stewart, Walter Goral, Barrie Gillmore and Bill Good behind miniature windmill, Bill Cave welcomed by the Lord Mayor of London, 1950 (Morris McDonald behind Bill’s left shoulder, Mr. D to the extreme right), the “Chee-Chee Girl,” a favorite of the band, Rose had a tiny high beautiful voice and when she sang “I can’t give you anything but… Chee Chee..” well that was her thing!

Someone sent us a short audio clip when the boys visited the BBC studios in London, England during the 1950 tour. The boy speaking is Robert Sherrin who when asked how he was liking England he answered, “The best part was the trip by train across Canada,” to everyone’s dismay. The clip is below. It is quite short 1:43 minutes.

REUNIONS OF THE 1950 KITS BAND

The boys who went on the 1950 Kits band tour of England and Holland have consistently gotten together for a reunion since I believe 1990. The last one that I am aware of was in 2015.

ABOVE: Bob Cave (with Cy Battistoni)

The invitation read 3:30 p.m., but by the time I arrived there was already a crew who had been setting up the house for the party. The “Boys” began arriving until there were 21 of us there. Rich Hall arrived later and boosted the total to 22. The day was sunny and hot so most of the first part took place out on the balcony under blue skies, as we watched the Holland-America and Princess Cruise ships passing by.

Brian Bolam had arranged that Bill Good, who is in hospital in Chilliwack, would phone us at 6:45 p.m. We were to practice some music, so we could serenade Bill on the phone. Setting up stands and music was chaotic, with Cy Battistoni doing a good impression of D’s stamping and shouting.

Before we started Arnold settled an old debt with Barrie Gillmore, with a packet of Craven A’s to replace the ones he “stole” in England. Then Barrie did his impression of “In Town Tonight” in London, complete with the voices of the announcer, Mr. D and Robert Sherrin, finally announcing the Washington Post March. The music was not good, but it was funny, especially the conflict between Collier and Bill Cave over his baritone solo!

There were two barbecues stationed on the deck, and Brian Bolam put on onions to fry for dinner. When Bill Good phoned at 6:45 everybody talked with Bill and then we played “Can’t help falling in love” for him. Then we took the time for some formality, honoring those who had gone on before and couldn’t be with us tonight.

Ron Wood reminded us of the names of the 3 members of the Band Executive for the 1950 trip, all of whom have died: Arthur Wood, Rich Brown, Sr, and Harry Gregory, and said, they had raised $100,000 to make our trip possible! Rich Brown, Sr., solicited much of the food for our train trip from Vancouver wholesalers. And we all thought it was the postcard we sold!

We mentioned Tim Hawes whose wife had suffered a heart attack, and then formally recognized the names of: Ronald Stewart (Clarinet), Walter Goral, Jack Hamilton and Owen Morse (Trombones) and Bobby Campbell (Baritone). [Robin Scott had suggested this moment of recognition in his e-mail]

Ron Collier had composed a song in memory of Mrs. D, “A Time Remembered”, which he played for us on the piano. It was on the sombre side which affected all of us deeply.
Now it was time to eat. Cy Battistoni and Arnold Emery were commissioned to be the cooks, Arnold on meat patties and Cy on Bavarian smokies. Brian brought out salads, sliced tomatoes, pickles and onions and all the fixings. We all ate around tables on the deck. It was a beautiful night and great food.

We moved inside to hear 3 of the “Four Notes” practicing: Glen Buckley, Brian Gurney and Howie Lear. Unfortunately, Dave Armstrong could not be here to make it the original “Four Notes”. Soon we were treated to many of the numbers they sang on the trip: Goodbye my Coney Island Baby, and other memorable numbers from the 1950 trip.
Then the guys just stood around in the living room trying to top each other with stories of: climbing up fire escapes and down pipes, unique places to drink and smoke, and encounters with girls, especially the ones who thought they had a claim to marry some of the guys.

Evan MacKinnon had sent a wonderful card to accompany a case of champagne – a gift for the occasion. So it was time for a toast to all the people we wished were there: Michael Hadley (the youngest on the trip!) delivered the toast with eloquence.

It was time to jam: so Bill Cave got on piano, with Bolam on trumpet, joined by Startup on trumpet, Hall on clarinet and Laird on Alto. Then Bill Cave joined us on Trumpet (yes, while still playing the piano!). It reminded some of us of Mr. D at football games playing his trumpet and the bass drum simultaneously.

The party was winding down, many hours earlier than 20 years ago! By 11:00 p.m. most had said goodbye promising to be fresh for the picnic at the Mullins tomorrow.

Day One of the reunion was terrific! 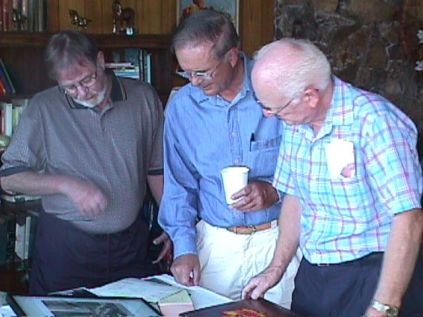 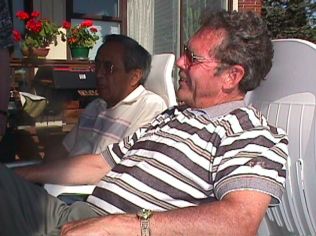 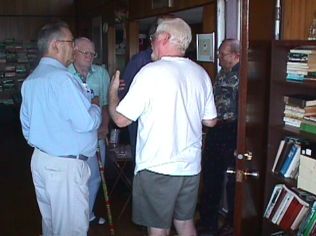 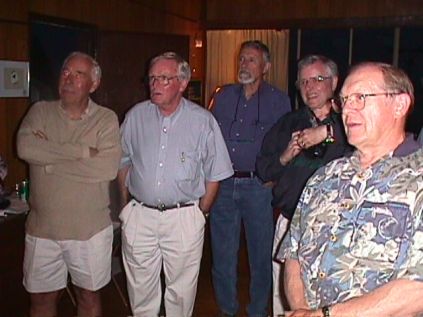 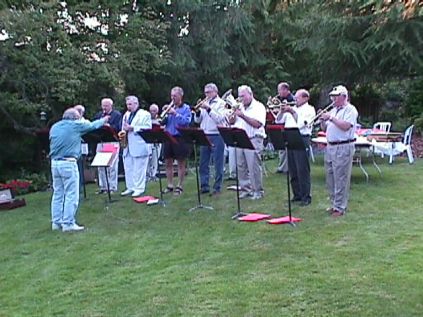 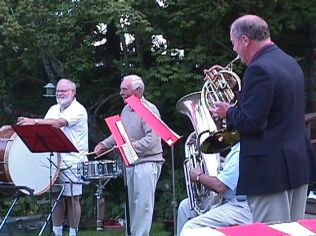 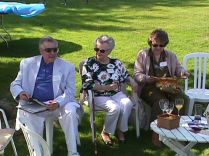 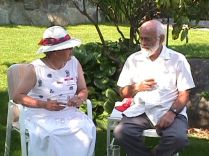 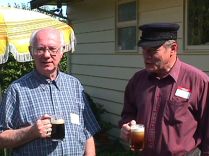 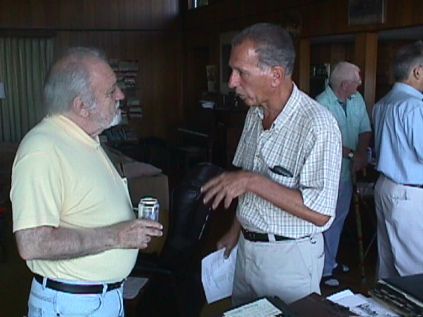 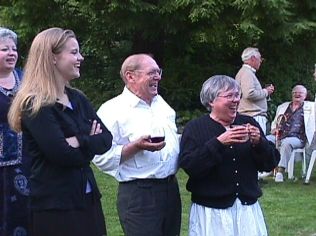 50th Reunion of the 1950 Kits Band trip to England, Scotland, Holland and Ireland

When Marilyn and I arrived (with my sister, Daphne Scott) there was a table full of people already there, many of whom had helped with the set up of the backyard. Norm and Julie’s home is gorgeous, high up in the British Properties, overlooking Stanley Park, English Bay, Kits Beach and Spanish Banks. The day was bright and gorgeous, and in the backyard at that high altitude on the cool side. Norm and Julie’s sons, Steve and Chris, began to help us in any way they could. They helped to make the whole afternoon and evening a success.

ABOVE: Norm Mullins with Mike Hadley

Norm and Julie Mullins had set up canvas gazebos and the tables were all set for the meal that was promised for later on. There was a table near the house which was filled with any liquid refreshment you might desire, all cooled and ready to refresh us.
The scene was much as it was for the reception two years ago after the 70th Reunion Concert, except that the Mullins had extended their garden to include a “right -of-way” behind some hedges. Here there was room for a bocci grass court on the left and a croquet court on the right. Soon the two Mullins boys encouraged a number of people to play, using house “Battistoni” rules: two teams with four each side!

Dal Richards and his friend Muriel Honey arrived and were warmly greeted and soon made themselves at home. Many of the families had accepted the Mullins invitation to bring family and friends. We met Tom Pickett’s son Ed, and Walter Goral’s daughter, Sherrie and Granddaughter, Candace. Three of the wives of our well-remembered friends attended: Maaike Goral, (Walt), Norma Hamilton (Jack) and Barbara Stewart (Ron).

Dinner was served by three attendants. We picked up huge slices of ham, cold meats and cheese from one gazebo and salads from another. It was time to hear the “band” play. There were two lines of us: Ron Collier, conducting: First line: Rich Hall, Bob Cave, Mike Hadley, Gordon Laird, Cy Battistoni, Glenn Startup, Arnold Emery, Brian Bolam and Ron Wood. Second line: Bill Cave, Barrie Gillmore Tom Pickett and Ken Sotvedt. We played “Can’t help falling in love,” “When the Saints,” and finally, expressly for Arnold Emory, we tried part of the “William Tell Overture”! Norm Mullins introduced Dal Richards to say a few words, but did so by reading what happened August 13, 1950! I will leave it for Norm to tell that story!

Then we had a formal time of recognition for the memories of Arthur Delamont, Mrs. Delamont, and each of our departed comrades: Ronald Stewart (Clarinet), Walter Goral, Jack Hamilton and Owen Morse (Trombones) and Bobby Campbell (Baritone).

Norm had ordered a wonderful cake, which you will see in the photos, which had a Big Ben (England), a windmill (Holland), a thistle (Scotland) and a shamrock (Ireland). Dessert and coffee finished the evening for most people but some moved inside to carry on the conversation further. Again, a big “thank you” to Norm and Julie Mullins for this great event!