ABOVE: Somewhere on the continent

On June 20, Arthur and his boys were off again, this time on their 12th European tour. For eight weeks they put on an outdoor concert each day traveling throughout England, Norway, Sweden, Denmark and Scotland. A member of the Rotary Club, Mel Goodwin, acted as manager. He contacted his fellow Rotarians in each city and they, in turn, took the boys on interesting tours. In most cities the boys were billeted out with Rotarians giving them a taste of home life in different countries. When asked if there were any problems on the trip Arthur said, “Six cases of measles didn’t hinder the boys performance as each case was from a different section of the band. It would have been a disaster if they had all been trumpet players.” Excerpt from – By Jove What A Band! 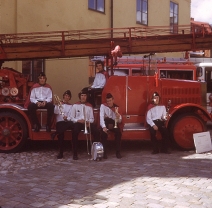 ABOVE: Photos courtesy of Bill Gumbleton