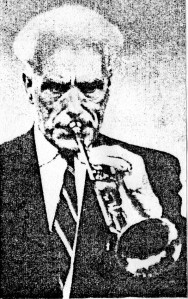 Arthur W. Delamont, the only organizer, instructor and conductor of the Vancouver Kitsilano Boys Band, was born in Hereford, England, in 1892. If he was here tonight he would be the oldest living citizen of Canada! Even though he is not here in person his spirit lives on in the memories of those of us who played in his bands and those who listened to and enjoyed his many concerts. Mr. D., as we called him, and his family were raised in the beliefs and traditions of the Salvation Army and it was with one of its bands that he learned to play the cornet. His irrepressible zest for motorcycle racing and dance hall music brought him to his first crucial decision – fun or faith. He left the band and committed himself to a career in music – with the occasional bike ride on the side. In 1910 the family moved to Canada and in 1914, intending to return to England for a great international Salvation Army convention, they suffered the ghastly misfortune of being aboard the Empress of Ireland when it was sunk in the St. Lawrence River with the loss of many lives including that of Arthur’s brother, Leonard. In later years those of us who travelled with him by ship from Quebec City were awed as he pointed out the site of the fatal collision and described the terrible moments he saw and endured.

In 1920 Mr. D. settled in Vancouver and in 1928, on the eve of the Great Depression, it occurred to him he might make a living and a contribution to his newfound community by organizing footloose boys into a band. They met first and always thereafter in the basement of General Gordon School – in Kitsilano – and he adopted that name for his group.

In time he set up junior bands in Grandview, Point Grey Junior High School, North and West Vancouver and, after World War II began, with the 111th Air Cadet Squadron.

Achievements of the Kits Band under his direction were remarkable. They scored an unbelievable 225 out of 240 points at the 1933 Chicago World’s Fair. In 1934 they succeeded in outplaying 21 bands in the West of England. In 1936, they repeated this achievement when they were the first foreign band to win a British championship at the Crystal Palace in London. In 1937, they participated in ceremonies for the opening of the Golden Gate Bridge in San Francisco, playing from the deck of a United States battleship. In 1939, their third British tour was disrupted by the outbreak of war and they travelled home in peril across the submarine-infested North Atlantic.

During the War they entertained armed forces groups all over B. C. as well as maintaining a demanding schedule of concerts in City parks and playgrounds and provided background music for Ice Carnivals in Vancouver, Nanaimo and Vernon. In 1947 the Band toured the West Coast of the United States and won acclaim in even Hollywood.

In 1950 Mr. D. took his boys on their longest tour – five months in Britain, Ireland and Holland where they won first place in an international festival of bands in a Concert Hall erected on the airborne landing fields of Arnhem. Their success in the Netherlands was repeated with wins at Kerkrade in 1958, 1962 and 1966. The group also toured European centres in 1953, 1968 and 1970 including a visit Moscow. [Note 1]

In all the Band won the Vancouver Music Festival top prize 28 times and the B. C. Championships four times.

Mr. D. was named Vancouver’s Good Citizen of the Year for 1946 and in 1979 the Governor General appointed him a Member of the Order of Canada.

The Kits Band was formally disbanded in 1974 but Mr. D.’s life in music continued. He loved to lead his University of B.C. group at basketball and football games and he suffered his final heart attack playing at a Masonic Lodge Installation.

Arthur W. Delamont was laid to rest in the Masonic Cemetery in Burnaby, B. C.