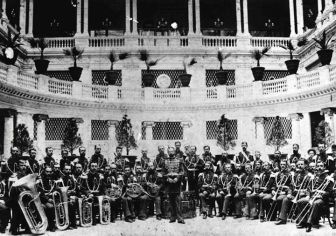 by Ken Sotvedt – July 10, 2002 Gordon – Sousa: you recently asked me what my thoughts were about the influence John Philip Sousa had on Arthur Delamont

Mr. D. told me that he first heard the Sousa Band in his home town of Hereford in 1901. This was Sousa’s second trip outside the U. S. A. and his first to the British Isles. The main soloists were Herbert L. Clarke, cornet; Arthur Pryor, trombone; and Simone Mantia, euphonium. Mr. D said he remembered the band being greater than anything he had ever heard. 61 players with fantastic woodwinds and a brass section that “someone really knew how to use” (Mr. D always scorned bandmasters who “didn’t know what the brass were for!”).

Sousa last came to Vancouver in 1924 (Capitol Theatre) and 1925 (playing in the horse barns at the P. N. E.) Roy Johnston was there in 1925 but recalls only that the cornet soloist wore white gloves when playing his featured solos! I am sure Mr. D was there too!

1. No nonsense, tuning up, fooling around, or inattentiveness on the stage.

2. No preparatory tapping of the music stand and waiting for everyone’s attention before starting a piece – a bow to the audience, turn around, and start.

3. Instant encores – again a bow, turn around, and start, except that Sousa used his own marches as encores and would tell the band what was to be played next before he turned to bow – so there was always a mad scramble of one player finding the music in an encore book (kept on the floor) while the other player on the stand started playing by memory or from the first line of marches pasted on the inside of the folder. Many marches were totally memorized.

4. Smartness on the stage, and for that matter at all times when associated with the band – immaculate uniforms and shiny shoes (boots), holding instruments similarly, feet together, etc. Mr. D took this more seriously than Sousa – photos of the Sousa Band show a more casual atmosphere on the stage where playing or at rest, but not sloppy.

5. Showmanship – soloists and sections standing – Sousa often had individual players or sections move to the front of the band – especially when playing marches.

6. Deviation (often spontaneous) from the written scores (again, mostly in his marches)

– various combinations in instruments. Woodwinds only, brass only, xylophone solos – up an octave, down an octave (or two).- piccolo solo on tuba (Stars and Stripes)

One thing Sousa never did was to slow down for Grandioso purposes (e.g. Kits Band in Washington Post, King Cotton, Stars and Stripes).Bring back some familiar memories?

One 1936 English newspaper review about the Kits Band states: The Vancouver Boys Band is “…the nearest thing to a Sousa Band ever heard.” So it is safe to assume that, even though the Kitsilano Boys Band never did (could) play like the Sousa Band (obviously impossible), the presentation, compared to other bands, was similar – exciting, varied, and unique – certainly a depart from what the British were used to.

In 1901 Sousa composed his march the Invincible Eagle for the Pan – American Games.