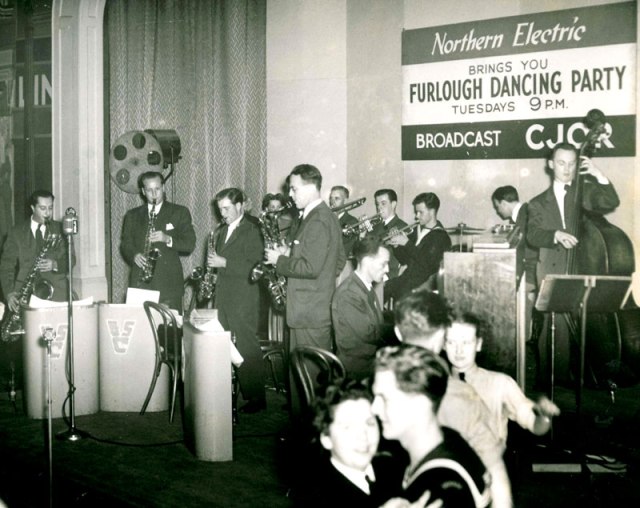 ABOVE: Dal and his orchestra playing at the Furlough Dance Party on Burrard Street

In the mid-thirties Gordon became involved with Dal Richards and his orchestra, playing at the now defunct Palomar Ballroom. Dal had a major role in shaping Gord’s attitude to the music business. Musically, he provided him with the opportunity to learn the basics of lead trumpet playing and also the basics of the crafts of arranging and orchestration. Gordon was able to write music for his orchestra and to take advantage of the opportunity to hear it played by professional musicians in professional circumstances. Dal was the first person to pay him for writing music. But it was his attitude towards the music business that was the most important. While Dal never talked about the glamour of the music business it was implicit in his demeanor, his bearing and his leadership. Dal was a good leader with the ability to keep everyone happy: the management, the musicians and the public they were playing for. This ability is just as rare now as it was then. Dal Richards was the man who, perhaps unintentionally, directed Gordon into music as a career.

Gordon married Joan Agnew a member of his dad’s Vancouver Girls band and moved to Toronto in the fall of 1939. Gordon could not get his Union card for six months, so he wound up playing casual gigs with some of the jobbing leaders around town, most prominently, the three Romanelli brothers (Luigi, Don and Leo). His first job for the Romanellis was at the Royal York Hotel. He arrived about 8:45 p.m. since the job was booked for 9 p.m. Don Romanelli immediately chastised him for not arriving early enough and informed him that, because of what he regarded as his tardiness, he was not going to allow him to play first trumpet. About half way through the job, Romanelli called out ‘Bugle Call Rag,’ which happened to start with a slightly jazzy bugle call written on the second trumpet part. At the last second he recalled this and immediately cut off the band, saying: “You are not allowed to play that tonight – please give the introduction to the first trumpet player.” After six months he was able to get a steady job as a trumpet player. Soon thereafter he was hired by Frank Bogart who had an excellent nine piece band at the Club Top Hat. This also brought with it an opportunity to continue arranging, since Frank agreed to buy two of his arrangements a week. Again he was in the fortunate position of hearing his arrangements played nightly for two or three months and when he made an error in judgment in his writing, he got to hear it over and over again, since he was playing in the band. Consequently, he usually didn’t make that mistake again.  The Top Hat Club was only a block or two from a ballroom called the Palais Royale and the Palais Royale had a policy of bringing every American ‘name band’ in for a one-nighter; bands such as Goodman, Ellington, Miller, James, Dorsey, etc. It so happened that the job at the Top Hat finished each night about a half hour before the closing time at the Palais Royale  so it became their habit to go over and catch the last few tunes when one of these visiting bands was there.

Gordon left Frank Bogart’s orchestra in 1945 to organize his own. He managed to secure a steady, six-night a week job for the orchestra in a seedy night club called the Hollywood Hotel on the westernmost fringes of Toronto. From there, by some mysterious twist of fate, he was booked with the orchestra into the Brant Inn, which was at the complete opposite end of the social scale. It was in Burlington, about forty miles from Toronto, and was a prestige booking which any orchestra would have welcomed.

Following their engagement at the Brant Inn, he booked the band into the Lakeview Casino at Grand Bend, a resort town on Lake Huron. His arranging at the time was being influenced by Stravinsky by way of Boyd Raeburn but the sophisticated patrons who came from London, Stratford and nearby Detroit seemed to appreciate what they were trying to do, so the musicians were happy, the patrons were happy and therefore, Eric McIlroy, the owner was happy too. From Grand Bend they returned to Toronto where they played, for three years, fall, winter and spring seasons, at the Top Hat Club until the end of 1949.